It being the last sprint, most of the tweaks done were to optimize and make the scene look a little bit better. Emily in particular had the most left to adjust.

Emily's facial animations are now in and implemented with an animation blueprint that's tied to body state.

Yami updated the UVs on the head so that now the body dissolve works better and looks more natural. The butterflies have been tweaked with new textures and using a different particle system than before.

There was also some slight optimization done to the BPs, mainly with disabling tick events and ensuring there weren't unnecessary nodes floating around.

I feel safe in saying this project is more or less complete! There are a handful of things that can be refined still, but the main functionality of the game is working, and the visuals are hitting the intended marks and effects. This has been a fantastic project to work on and I'm proud of the results.

Emily's head, body, and skirt have been combined within the blueprint to utilize her face rig, body rig, and the sculpt done on her dress by Yami as one cohesive piece. She now animates with her head following along, and facial animations are set up with the same logic as the body animations, allowing them to update together once facial animations are in. 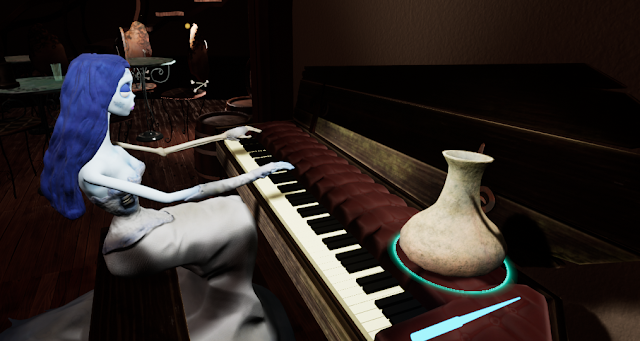 After Emily's finished playing her finale, she now dissolves as the butterfly VFX swarms around her.
The dissolve needs a few... tweaks still.

The VR hand now has logic set up to release the hand when the bouquet is placed, detecting which hand is holding it, deleting the object, and then calling the hand release function and updating the blend state for that hand.

The flowers and vase are also updated to the final models. 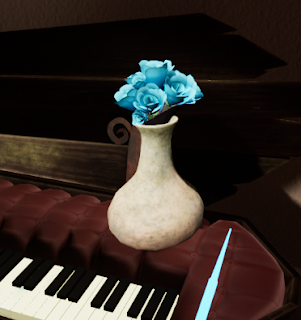 My team was assigned the No Country for Old Men lighting project, so I pulled motel reference images at night to look at (forgive the watermarks). 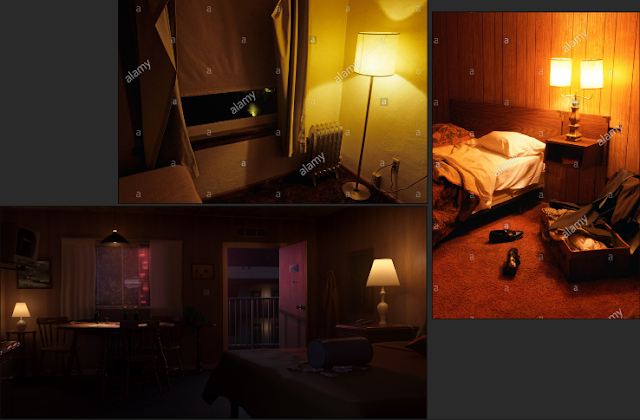 Particularly wanted the warmer, more grungy yellow light to make the room look cheap. And this is what I ended up with: 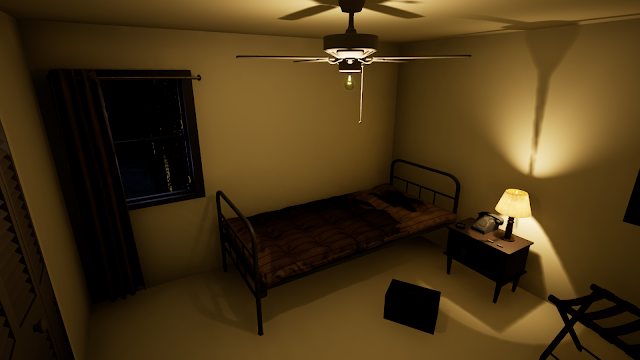 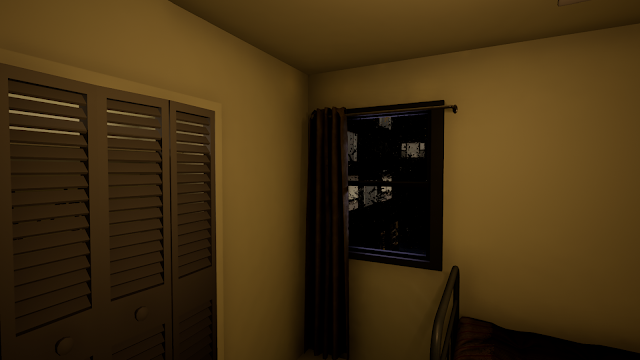 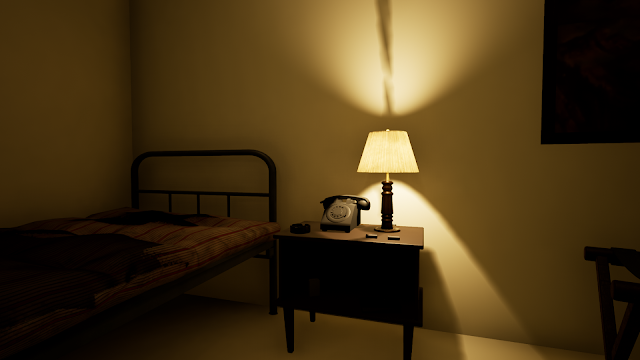 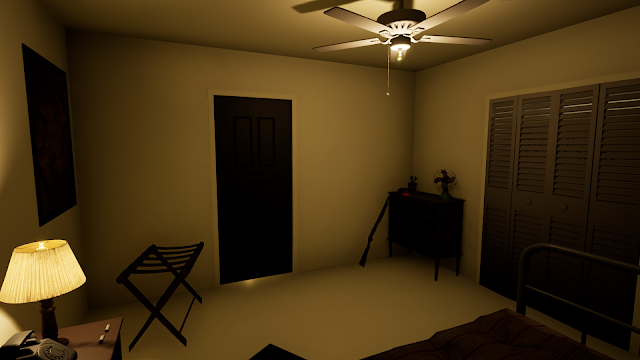 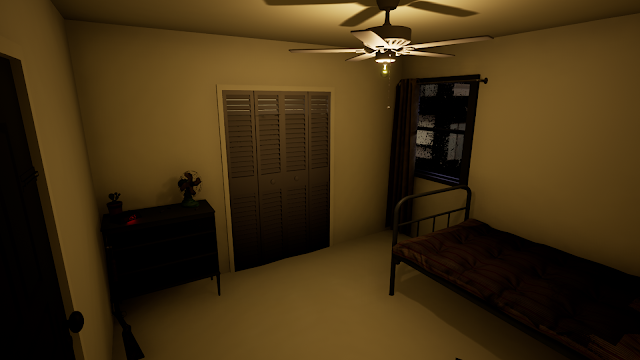 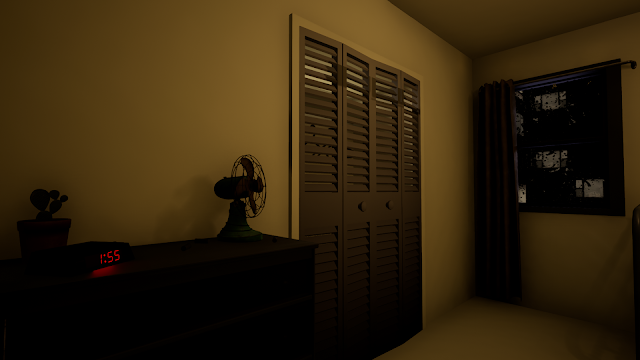 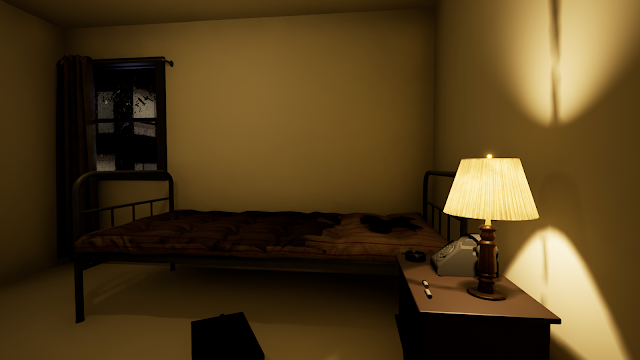 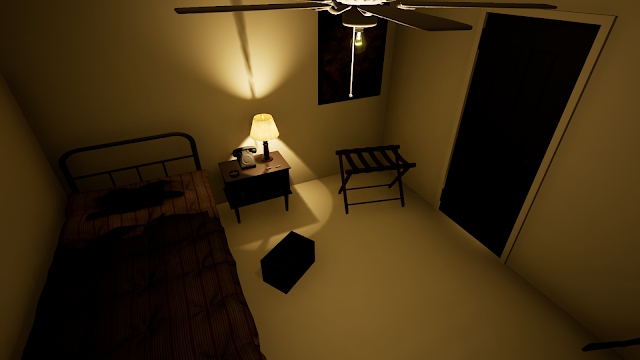 The final mesh for Victor's hands is skinned and rig and has been implemented into the game. 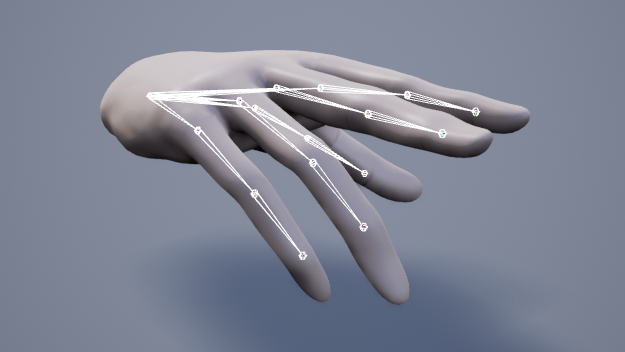 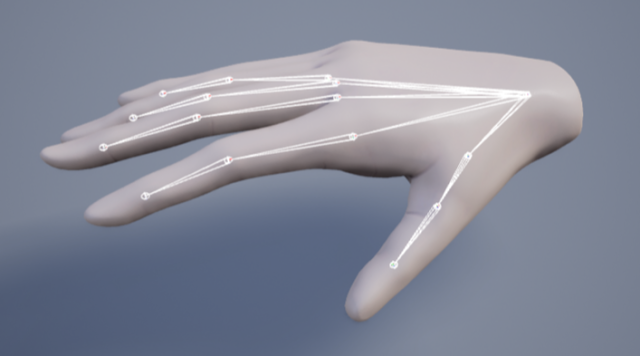 Emily's facial rig is set up with controls. Refining the skinning before handing the rig to Franco for animation and getting the head in scene. 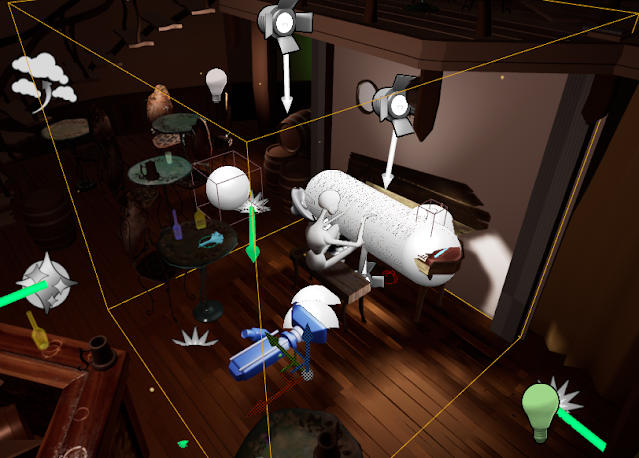 -Adjusted player position to begin closer to the piano

-Disabled tick for BPs that did not require it

Fell behind this past sprint with my tasks. This past sprint was focused around making Emily's facial rig, finalizing Victor's hand rig, adjusting the player's hand to be able to interact with the piano, create a simple VFX for the piano key, and make a proxy ending for Emily's finale. 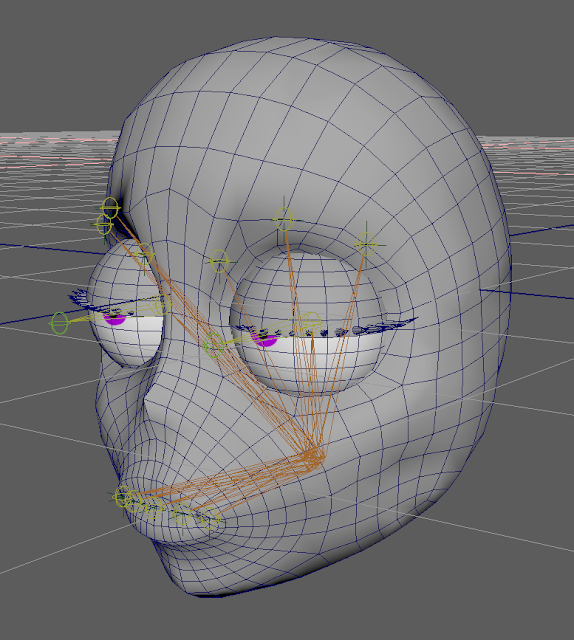 Work on Emily's facial rig has been started. Her joints have been placed and the skinning is in progress. The eyes, eyelids, eyebrows, and mouth will have set driven keys to control the rig once skinning is complete. 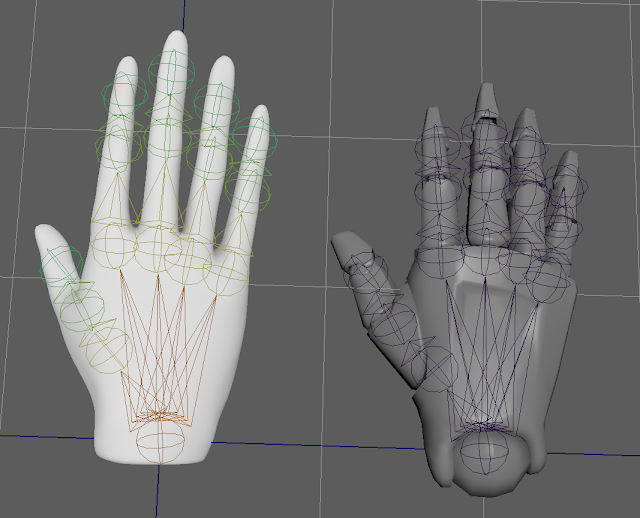 Victor's hand has also begun to be rigged. The bones from the UE4 mannequin hand have been used in his hand so that animation can be easily retargeted. Skinning is currently in progress and once completed, the hand can be taken into scene. 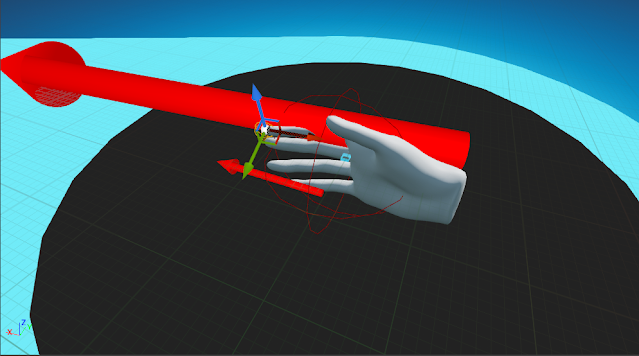 Hez troubleshot and corrected the issue with the VR hand which caused a fatal error when it interacted with the piano. The hand now can interact with the piano with the pointer finger without issue. The piano stick is still left as an option.

A material for interactable objects has been created and applied to the flowers and vase. However, it is not interacting correctly with the piano key and will need to be modified to get a better effect.

The largest adjustment that's been made is the finale. Emily now "plays" out her portion of the song. When she is done, the butterfly VFX spawns around her and then she disappears, similar to her ending scene in the film. At this stage it is largely proxy, but the main mechanics are implemented and just need to be refined.

As I said, this past sprint I fell behind in work and will have to carry over the rig and piano VFX into the third sprint. This was the sprint with the least tasks assigned to me originally, so the workload won't be much extra. The current plan for next sprint is as follows:

My remaining tasks are as follows: 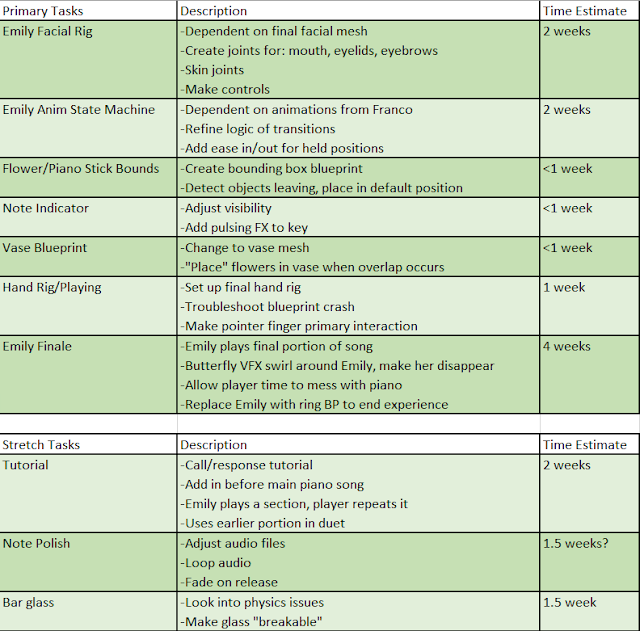 The planned schedule for these tasks (not including stretch tasks) are as follows:

This past week I was able to finish the portion of the song the player plays so that it follows the tune of the actual Corpse Bride duet. I was also able to make it so that the flower vase is now utilized when placing the flowers rather than the temporary box. Thanks to Hez's troubleshooting, the hands are now able to play the piano with the index finger and does not cause a crash upon playing. The piano stick is still there as a secondary option.

Victor's hand has been fully modeled and the UE4 mannequin hand rig has been applied to it with basic skinning. The hand has been implemented into the MotionController2 blueprint so that the player's hands are replaced with Victor's hands. 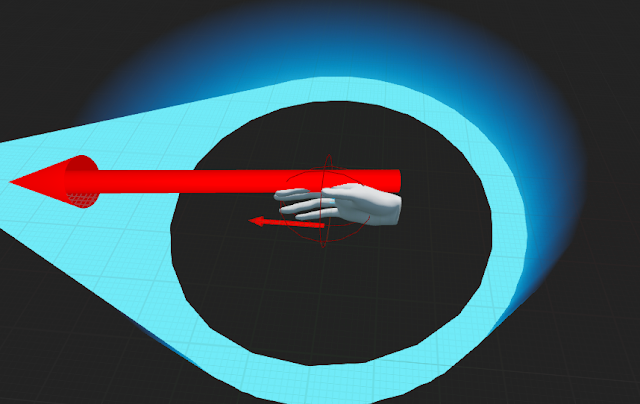 BP_Emily has been created and placed in the scene for the player to interact with. A basic set of poses are made for Emily to assume throughout the course of the song. She goes from an idling piano playing state, to looking away from the player, to turning towards the player, and raising her arms. Each state is changed in BP_PianoKeys so that the events are directly tied to the player's progress with the song. Correct notes will draw her attention. Incorrect notes currently do nothing, but may cause her to turn away until a correct note is hit again. 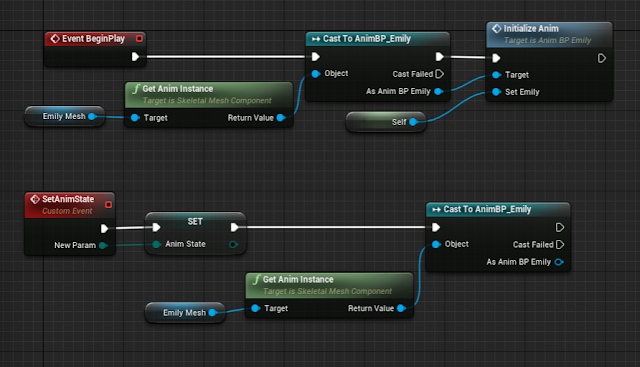 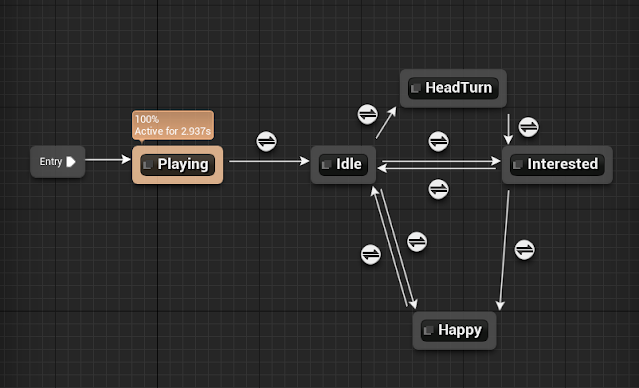 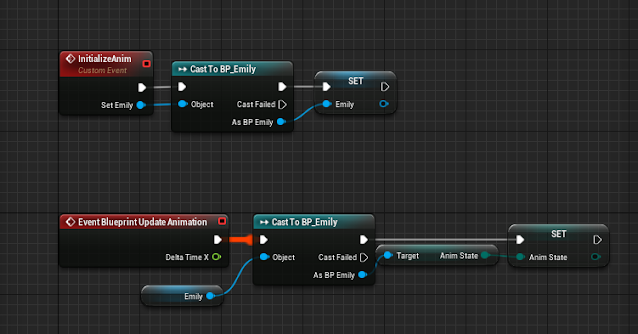 This week was largely audio-related work to add more ambience to the scene. In particular, the piano notes have all been sourced and put into the piano for it to function fully. 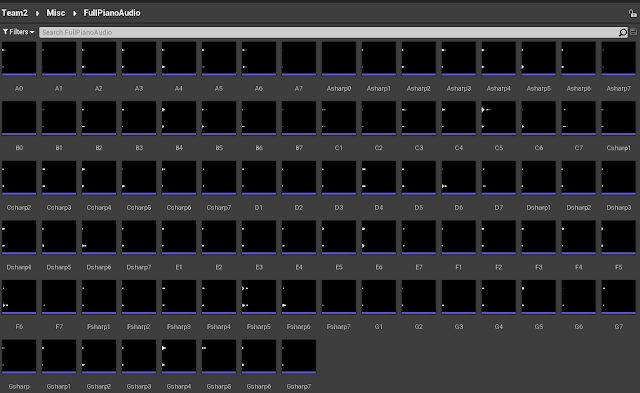 A snippet of Victor's audio has also been added to the BP_Pickup_Flowers to help cue the players to give the flowers to Emily after they pick them up.

VICTOR: I, ah, think you dropped these.

Did some minor adjustments as well to the fade in and out of the scene and file house-keeping to tidy the project a bit.

The forest area has a fade to black transition as a placeholder for more complex transition planned. Fade-in also implemented for bar area.

Within the bar, player can interact with the piano with the piano stick and place flowers for Emily to begin the piano playing sequence. Piano notes have been fully sourced, but are not yet hooked up.

Basic test song implemented for time being in place of full composition. Completing the song sequence correctly results in player exiting to the end credits scene.

End credits allows player to either re-enter the bar via the ring (fully replay experience, including song) or exit the game via the butterfly (stand-in cube for in-progress model.)

The keys now hold a reference to the parent piano blueprint so that they can call back to the functions.

The individual piano keys and full piano keyboard have been modified to include enumerated values of each key (A-G, 0-7, including sharps) so that notes can easily be set and identified for the song sequence from the parent piano blueprint. These have been arranged inside of a dictionary that allows the piano to call upon the child actors based on the enumerated value assigned.

A rough start to the song sequence has been implemented in place of the proper composition for the time being. This progresses the sequence as each note is played correctly and alters the key to glow if it is the next note. Currently there are no consequences for incorrect notes. 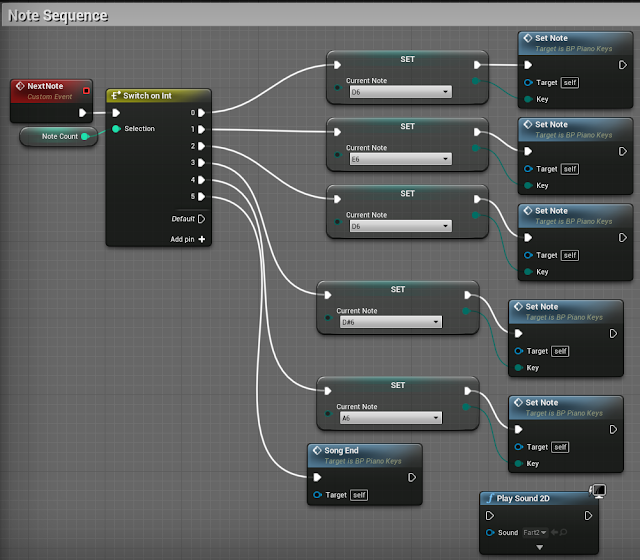 The black and white piano key blueprints have been modified to call upon the parent piano key's RightNote custom event when they are released to test if they were the next note to be played. If not, no action is taken.

The individual keys also now have a dynamic material applied so that they can be altered to indicate the next note. A more refined effect will be made later on, but for now it is a simple emissive ramp. 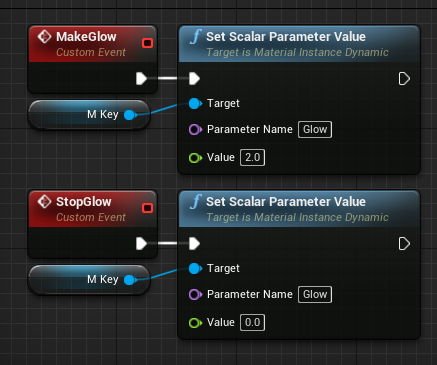 When the end of the note sequence has been reached, the SongEnd event is called, and the player is taken from the bar area to the end credits forest.

Level Triggers
The ring blueprint has been modified to include a fade-out event to transition the player better from the forest to bar.

There is also now a second level trigger created to exit the game. It also includes a fade-out event and quits the player out of the experience.